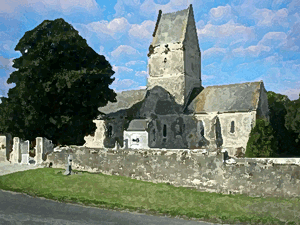 This June we will remember the 75th anniversary of D-Day, when the Allies stormed the beaches of Normandy to liberate Europe from the Nazis during World War II. It’s sure to be a somber day of remembrance, especially now that most of the veterans of that terrible day are gone.

Last summer while on renewal leave, I had the chance to visit Normandy and many of the sites where the invasion took place. My son and I joined our guide, Monica, on a private tour and, while my passion for history has led me to read extensively on the events of that day, Monica told us one story I had never heard and that has been resonating with me ever since — a story that, for me, has become a paradigm for ministry.

We stopped at a little 11th-century church in the village of Angoville-au-Plain: a place so small and innocuous that most people blow right by it on their way to tour the invasion beaches. In the early morning hours of D-Day, thousands of U.S. paratroopers were scattered across Normandy, and this small crossroad village became hotly contested territory. As the wounded began to cry for help, two medics from the 101st Airborne Division, Robert Wright and Kenneth Moore, looked to set up an aid station and the village church seemed to be the best available option. They set about gathering the wounded from both sides into the church using a handcart and wheelbarrow they found, often exposing themselves to enemy fire in the process. They used the pews of the church as hospital beds. Monica showed us several of those wooden pews that are still in use and that continue to show the stains of blood where those wounded were treated.

A hole in the roof, still stuffed with canvas, and a shattered tile on the floor are remnants of the intense fighting around the church where a mortar round entered the sacred space but failed to detonate. As the battle raged back and forth, American paratroopers were forced to retreat from the village, and the medics faced a difficult decision. Their lieutenant wanted to withdraw them, but Wright and Moore insisted on staying to tend to the wounded, even if it meant their capture by the enemy.

The battle raged outside for three days, with the village changing hands several times. All the while, Wright and Moore kept tending the wounded from both sides. At one point, several Germans stormed through the door of the church, but seeing that the medics were treating wounded from both sides they quietly left and marked the door with a red cross. In another instance, a German soldier came seeking treatment, but Wright and Moore had established a rule that no weapons would be allowed in the church. They refused to treat the German until he added his weapon to the growing pile outside the church door. He eventually did so and came under their care.

On June 8, a couple of days into the fighting, two Germans who had been in the bell tower of the church since before D-Day finally came down and surrendered to Wright and Moore, who immediately put them to work. The medics tended the wounded for three days straight with no break and no sleep, short on supplies and under constant fire, but they saved some 80 lives in the sanctuary of this little church. Many other lives would be birthed into the future families of those whom they saved. The pews that had been built for saving souls became the place where people broken by conflict and pain found salvation of their bodies as well. The windows of the church were all blown out and Wright was hit by a piece of the falling ceiling. He would receive a Purple Heart for it, but it was a medal he only grudgingly accepted.

As I listened to Monica spin out this true story, it occurred to me that Wright and Moore were doing the ultimate form of pastoral ministry in that holy place. They had been baptized by fire and ordained by duty to continue their work. They were priests officiating over a sacrament of broken bodies and shed blood. Their tireless work revealed a much deeper truth about what the church is about — a hospital for broken people, no matter their “side.” These priestly medics seemed to understand this instinctively to the point at which even their enemies recognized the importance of the mission. They were being the church, not just using one for an aid station.

I loved that the people of this little church didn’t fix the holes, patch up the floor, or scrub down the pews after the war. The missing pieces of stone on the walls that were taken off by bullets and shrapnel haven’t been patched over. They did replace the windows, but with a tribute to these two medics who became saints. This holy place is now a monument to the kind of church God has called his church to be: a place with some battle scars but also a place where the wounded find shelter, healing and hope; a place where pastor-medics are willing to sacrifice themselves to tend to those in need.

May it be so with us!