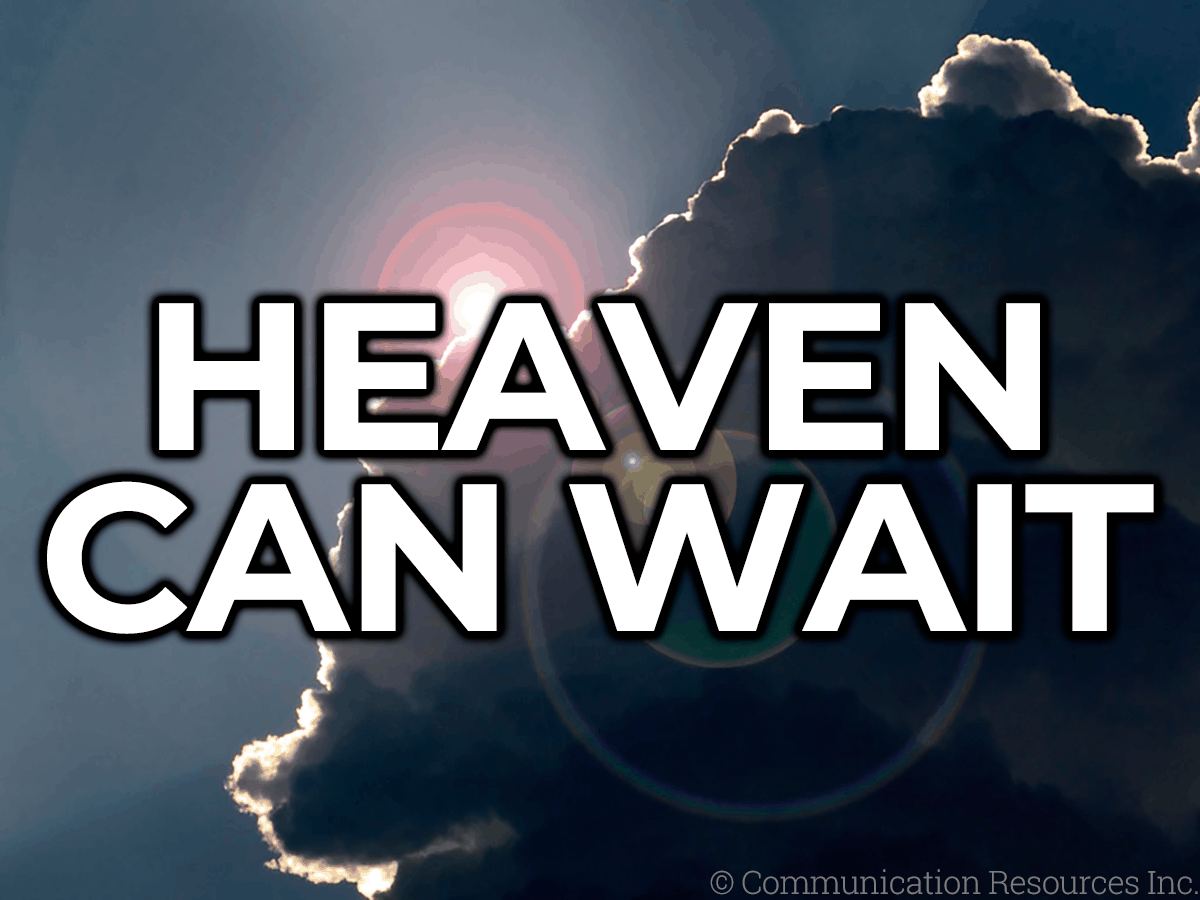 If you’re like me and grew up in the church, you probably had some really great Sunday school teachers who helped you on the path toward ministry — people who, week after week, gave up their time and sanity to lock themselves in a room with some socially inept yet theologically inquisitive young minds. My best Sunday school memories are from the fifth grade and Mrs. M’s class. Her kids had already grown and gone, but she chose to spend her Sunday mornings with a bunch of nose-picking and gum-popping pre-adolescents. She had a way of getting our attention, though, which largely consisted of dramatically flipping off her reading glasses and letting them dangle around her neck when she wanted to make a particularly poignant point.

One day we were “discussing” the topic of heaven. Foreshadowing the theologian I would become, I posed the question that seemed to be on the mind of the group (or at least on the minds of those who weren’t at that moment hatching a plan to escape the classroom and go hang out at 7-11 across the street). I asked Mrs. M, “What do you think heaven will be like?” It was an honest question and off flew the glasses so quickly that they rattled the chain around her neck. With that, even the conspirators leaned in. She looked at me, smiled, and said, “Oh, well, heaven is going to be a lot like church … only going on forever.”

Now, “church” for me at that time in my life meant the worship service, which usually included three hymns with undecipherable words like “diadem” and “Ebenezer,” some long Bible readings and an even longer sermon that contained no references to baseball, Evel Knievel, or blowing up G.I. Joes with firecrackers — things that were of utmost interest to a fifth-grade boy. That hour on Sunday morning was already an eternity in itself. I couldn’t imagine spending my forever with my mom constantly elbowing me in the ribs to keep me awake. I considered asking Mrs. M about the alternative to heaven, but she seemed so happy about her answer. Better to leave her glasses where they were.

It’s interesting to look at all the ways that people view heaven. Mrs. M’s view, it turns out, was just one of many. Talk about heaven in this culture and you’re likely to get a bunch of different views that run the gamut from the rapturous visions of the Left Behinders to the self-indulgent New Age fantasies of the pop-culture gurus that seem to always have a book that’s recommended by Oprah. Regardless of the origin, the overarching view is that the goal of life is to someday be sucked up by some heavenly Hoover into the great beyond to live a life of eternal bliss.

What I’ve learned, though, beyond Mrs. M’s class is that that worldview (or heaven-view) is really more Gnosticism than New Testament … more Plato than Paul. When Jesus talked about the kingdom of heaven, he wasn’t referring to a cloud-based location but to an earth-based movement, the one we pray for every time we murmur the Lord’s Prayer. The biblical worldview is not about the dualism of body and spirit, but their unity. The goal is not to make it to a disembodied afterlife, but to live an embodied and renewed resurrection life, making God’s will “on earth as in heaven” a reality in the present while awaiting its completion in the future when Jesus takes over for good. A proper vision of heaven is really a world in which God reigns and God’s people live the abundant life we were created for in the first place. To put it another way, our task is not to get people into heaven, but to get heaven into people.

There’s a lot more to say about this and not enough space here to do it. One of the books that has been guiding me lately is N.T. Wright’s Surprised by Hope, which is all about this thoroughly biblical and immensely insightful vision of heaven on earth. It’ll never make Oprah’s book club, but then again stuff that is both practical and biblical rarely does!

I’m grateful for Mrs. M’s instruction in those early years, but what I’d really like for our fifth-graders (and adults for that matter) to hear is that the kingdom of heaven isn’t an eternal church service, but a movement worth giving their lives for.

Firecrackers may or may not be included.