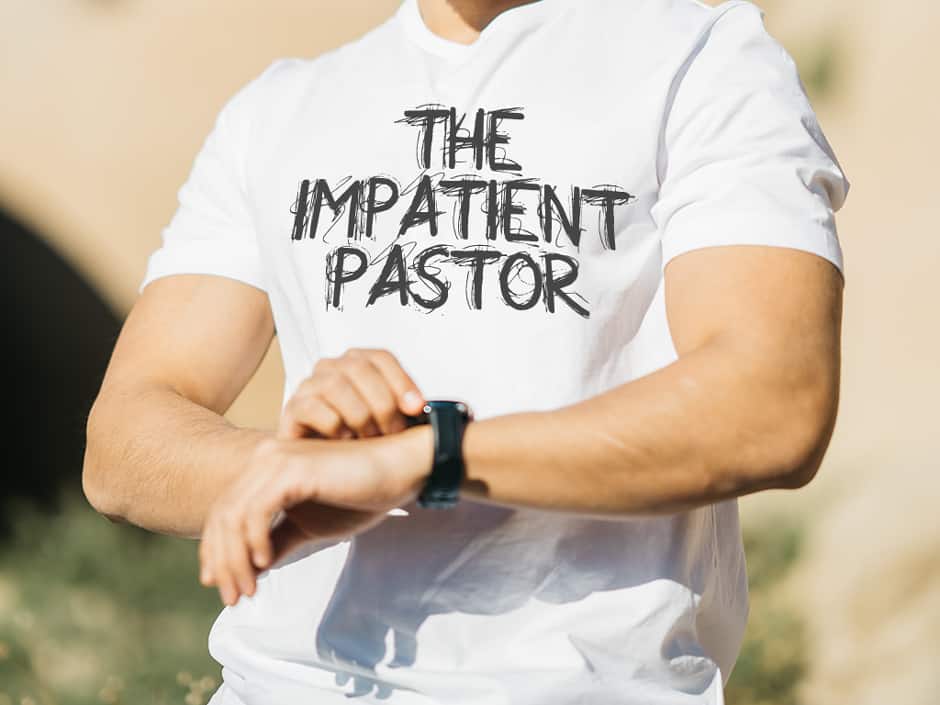 One of the most important spiritual truths I’ve discovered over the course of a life of ministry is that a prayer for “patience” is the one prayer God almost always answers, usually in the form of offering me an immediate opportunity to exercise it. Patience, it turns out, isn’t something that God simply grants to us; it’s something God actually expects us to practice!

That’s tough, because I’m not a patient person by nature, and this means I get to practice a lot. Standing in a long queue for anything makes me vibrate with frustration, and sitting in standstill traffic often leads me to mutter non-pastoral words under my breath. I’ve had to really bear down on the patience thing in those situations, remembering that I’m not in control of everything — an ontological reality of which I need constant reminding.

The real problem, however, is when that original sin of impatience spills over into the pastorate. If we’re impatient with the little things in life, then it’s no wonder that we’re impatient when it comes to the church. Eugene Peterson calls impatience the “besetting sin” of most pastors. We have a goal and a plan in mind for the church: we’re going to fill it with people; we’re going to preach five-step plans to get people to be better Christians; and we’re going to change the world. All of these are lofty goals, but Peterson reminds us that, in reality, pastoring a church is “slow, slow work” because bringing people (and ourselves) into obedience to God takes a long time. When we lack the patience to lean in for the long haul, we are prone to take shortcuts and use any means available to boost the metrics that look good to the denomination or the church board. We might be building the church, but we’re not actually changing anyone’s life for the kingdom.

I picked up a book recently that confirmed Peterson’s assertion about impatience being one of the great sins of those who lead churches. Church historian Alan Kreider has done an intriguing study of the nature of the rapid growth of the early church in its first four centuries titled, The Patient Ferment of the Early Church. Interestingly, the catalyst for that growth had little to do with the things the church impatiently works at today: evangelism strategies, attractive and “relevant” worship services, better facilities and more programs. Instead, Kreider points out that the number-one driver of the church’s expansion had to do with patience — forming people who would be so obedient to Christ and so reflective of his character that they would be attractive to their pagan neighbors. In other words, it was all about forming the habitus of the people rather than forming larger churches.

Imagine a church, for example, where outsiders were not permitted to attend the church’s worship services or the Eucharist until they had undergone three years of catechism and mentoring by an experienced, spiritually mature Christian sponsor. So much for “relevant” worship! Evangelism wasn’t about knocking on doors or having a better website, but rather about these intentionally formed Christians living in close proximity to others and demonstrating the Christian life in such a way that their neighbors were intrigued. Church leaders didn’t focus so much on imparting knowledge about the Bible and theology to their people, but, rather, were concerned about whether their people were actually living in the way of Christ. It wasn’t about counting the number of people in the church as much as it was counting how much Christ had gotten into the church’s people.

Our church leadership ancestors were a patient lot, and it was their patient work with people over a long period of time that influenced the culture around them. After Constantine, however, the church began to adopt the impatient strategies and metrics of the secular world, and the exponential growth that characterized the early church began to slow as people and their leaders became more enamored with volume than vitality. Today, the world looks at the church and doesn’t see much difference between themselves and us. Our impatience has led us to irrelevance.

It’s time for us to pray for patience again, and not be afraid to exercise it when it comes to leading our churches. Are you preaching in a way that’s less about information than it is about transformation? Is your ministry designed to look more like a marathon than a sprint? Are you caring more about growing Christian character in your people than you are about the number of people in your pews? In a world where Christianity is being pushed to the margins, we have an opportunity to re-adopt the patient strategy of the early church again. We can learn to be patient pastors who are in it for the long haul.

Source: Kreider, Alan. The Patient Ferment of the Early Church: The Improbable Rise of Christianity in the Roman Empire. Grand Rapids: Baker Academic, 2016.