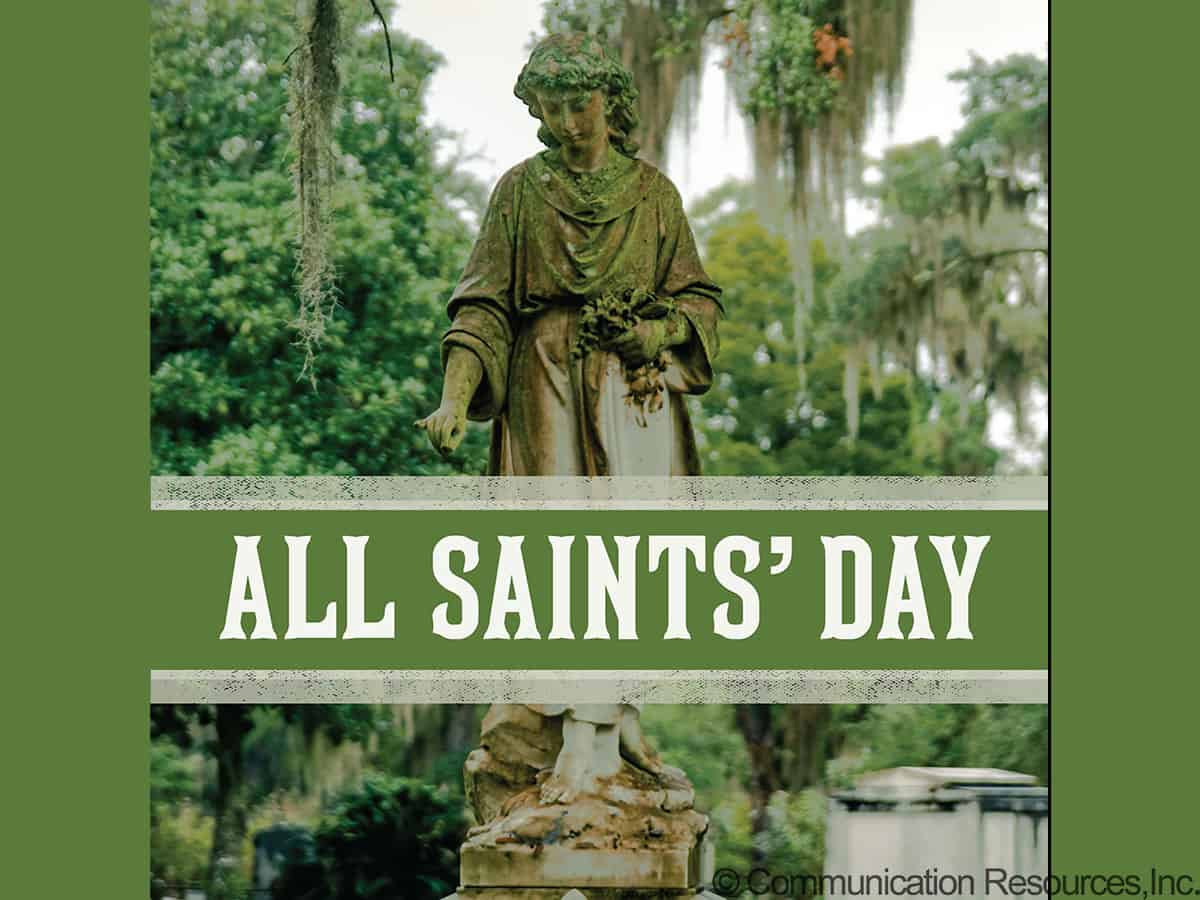 The church calendar has two three-day seasons, if you can call them that. I don’t know what to call them, actually. Three successive days in which something really holy and mysterious is going on — that’s all I know. The first is Good Friday, Holy Saturday and Easter Sunday. It’s always Friday, Saturday and Sunday — a weekend.

The second is not always on a weekend. But it always begins on October 31 and ends on November 2. On these three days the church is very interested in dead people. And some might say that on All Hallows’ Eve, they actually see dead people. Unlike Easter, however, none of them are coming back to life.

I am referring, of course, to the three days, All Hallows’ Eve, All Saints’ Day and All Souls’ Day. The first of these is celebrated in popular culture as Halloween and, by the by, why aren’t Christians up in arms about the secularization of All Hallows’ Eve? Hey, this is our holy day! Let’s keep the hallow in Halloween!

Anyway … This three-day fascination with dead people has accounted for more Hollywood movies than all the other religious feast days combined, hands down. All Hallows’ Eve has given us Freddy Krueger, for example, a character featured in the Nightmare on Elm Street franchise, a horror and slasher industry unto itself made up of nine movies, a TV series and a bunch of novels and comic books. But there are other movies as well. Halloween (another franchise of 10 films, novels, merchandise and a video game), Night of the Living Dead (1968), Hocus Pocus (1993), All Hallows’ Eve (2013) and Carrie (2013).

This interest of ours in dead people is shared by other cultures, of course. Día de los Muertos, or Day of the Dead, is observed as a holiday November 1 and 2 by many Spanish-speaking countries around the world. In Mexico, it is a national holiday, having roots in religious practices that are thousands of years old. The deceased are honored by the building of altars, and offerings of food and drink. Relatives visit the graves. November 1 is often referred to as Dia de los Inocentes, or Day of the Innocents, a day to honor dead children and infants. November 2 is reserved to honor deceased adults.

The Chinese equivalent is Qingming, or Tomb-Sweeping Day. It’s celebrated in early April (April 5 in 2018), and is a day during which people pay respect to the dead and take care of their gravesites or tombs. It’s a lot like Memorial Day. In China, however, people will visit the tomb and sweep and clean, turn up the soil, plant fresh flowers, and then go to the temple. At the temple they offer sacrifices of wine, tea and fruit. They burn incense.

And then there’s the “hell money.” Family members fold joss paper — small slips of paper that look like money — into triangular shapes, fill shopping bags full of this “ghost money” and burn it in the temple fires. Ghost money is often called “hell bank notes” because many believe it is the currency of the afterlife and can be used to bribe the gatekeepers of hell to help their loved ones escape punishment or to prematurely release the loved ones to more congenial climates. Those who believe their loved ones are already in paradise, or heaven, offer ghost money or “heaven money” so that their ancestors can spend lavishly in the afterlife, perhaps do some remodeling of their heavenly home. At home, willow branches are placed in the doorways to ward off the evil spirits that tend to wander about on Qingming.

If you really want to get in the mood for All Hallows’ Eve, visit the Bone Chapel outside Prague. Its real name is Sedlec Ossuary Chapel, and it’s located beneath the Cemetery Church of All Saints near Kutna Hora in the Czech Republic. It contains the skeletons and bones of between 40,000 and 70,000 people, and many of these bones have been “artistically” arranged into a chandelier, garlands, monstrances, wall designs and more. I was there last spring. I tell you, it was the most macabre sight I’ve seen in my life, and that’s when I started to think about this three-day season we Christians observe October 31 to November 2.

When the church settled on November 1 and 2 as a special date for the feast of All Saints, followed by a day in honor of her soon-to-be saints, the feast of All Souls, many believe it was because by the end of October and early November, the earth is becoming barren, brown and drab. Death seems to be approaching. The air is still and somber. Time to remember the dead.

It’s a good thing to remember the saints of the church — those who throughout the church’s history have demonstrated remarkable achievements in piety, theology and good works. We might even have our favorite saints. We Protestants are partial to Saint Francis and Saint Teresa of Calcutta (otherwise known as Mother Teresa). If we had a formal canonization process we’d probably have a Saint Martin (Luther). But on All Saints’ Sunday we usually remind ourselves that we’re all saints — a declaration which diminishes those who have served God in ways most of us are unable or unwilling to do. There are saints and then there are saints. And besides, we can remember our departed “saints” on All Souls’ Day, if remembering them on Memorial Day is not enough.

So, why do we celebrate All Saints’ Sunday? What are we doing? Surely, we are not trying to spring Uncle Joe from purgatory, are we? Nor are we trying to contact the dead.

Let’s be thankful for our loved ones. But let’s also honor and remember those saints who gave so much — many, their very lives — so that our spiritual lives would be richer today.