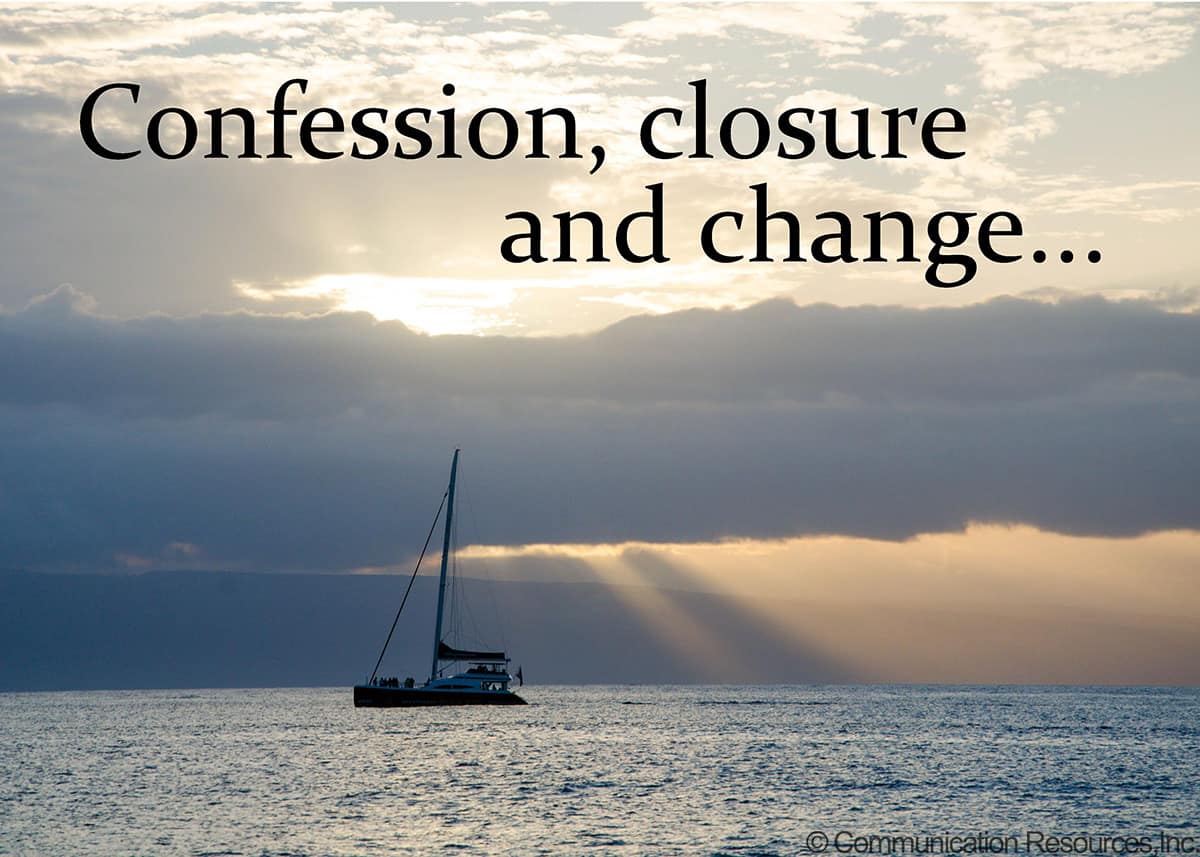 Many of those implicated or accused have admitted wrongdoing and offered some sort of apology.

If you’re of the Boomer generation or older, you remember Norman Lear’s groundbreaking 1970s television sitcom, “All in the Family.” Carroll O’Connor and Jean Stapleton played Archie and Edith Bunker, a husband and wife duo known for Archie’s outbursts and Edith’s compliant behavior.

In one scene, Amelia, a friend of Edith’s, comments on Archie and Edith’s marriage: “Of all the people I know, you’re practically the only one who has a happy marriage.”

“Oh, I ain’t got no secret. Archie and me still have our fights. Of course, we don’t let them go on too long. Somebody always says, ‘I’m sorry,’ and then Archie always says, ‘It’s okay, Edith.’”

All of us, assuming none of us are perfect, have had to apologize. Perhaps these apologies involved the following:

“Honey, I feel badly about what I did / said / didn’t do.” That’s contrition or repentance.

“Honey, here’s a replacement for what I took / damaged / destroyed.” That’s restitution.

Flowers, a box of chocolates and dinner. That’s reparations.

The most common form of the non-apology is the expression “I’m sorry.” No two words roll off the tongue so easily when one has committed some kind of faux pas as the words “I’m sorry,” and no two words have been so emptied of meaning.

To say “I’m sorry” has become a mantra reflexively uttered whenever the situation careens in a direction we had not anticipated.

“I’m sorry” is not a meaningless expression because it’s an important social interaction that acts like oil on machinery. It keeps relationships and connections alive and functioning. It’s simply a device that keeps a minor situation from being more than it is. The failure to say “I’m sorry” when a slight infraction has been committed could lead to hurt feelings and deep misunderstanding.

But this kind of apology is not an apology. It’s an important social convention, but not more than that. To say it in such circumstances shows that you have some social skills, however limited, that you’re not a complete troll, and that you understand that “I’m sorry” is something you sometimes need to say.

Often, however, we can’t even say “I’m sorry,” but simply say “Sorry.” This seems to suggest that we’ve removed or absolved ourselves of responsibility. We have not committed the offense. It’s not “I’m sorry.” Now, it’s simply “Sorry.” Thus, “Sorry” — when more is required — is self-righteousness dressed up as an apology.

Here are three things that must be present in an apology for it to help you get up and still look good: confession, closure and change.

A confession says you did it. You were wrong. Period.

A good apology seeks change. A negative experience can be shape­shifted to become a positive one. An apology with a confession and request for forgiveness can reshape the experience and turn a possible failure into a redemptive moment.

The late Angeles Arrien, writer and cultural anthropologist, once described a reshaping experience. She was at a bus stop sitting next to a woman who was reading a newspaper.

While waiting for the bus, she became engrossed in the performance of a 14-year-old boy on a skateboard. He had his baseball cap on backward, and he was skating beautifully and very fast. A couple of times he came by where the women were sitting and buzzed them, very nearly hitting them.

On a third pass, he accidentally knocked the newspaper out of the woman’s hands. She said, “Oh, why don’t you grow up?”

Arrien writes: “I watched him glide down to the corner of the block, where he stood talking with his buddy. The two of them kept looking back over their shoulders at the woman. She hesitated for a moment, then rolled up her paper, tucked it under her arm and walked into the street motioning to him. ‘Why don’t you come here?’ she called. ‘I want to talk to you.’

“Very reluctantly, he skated over to her, turned his cap around with the bill in front, and said, ‘Yeah?’

“She said, ‘What I meant to say was that I was afraid that I might get hurt. I apologize for what I did say.’

“In that moment, I witnessed what is called in Spanish a milagro pequeño — a small miracle. This small miracle was a holy healing moment between generations, between two human beings who had just become important strangers to each other. The woman chose to shift the shape of her experience by moving out of reactivity to creativity.”

Good apologies seem to be difficult to deliver. Perhaps a good one is, indeed, a milagro pequeño.