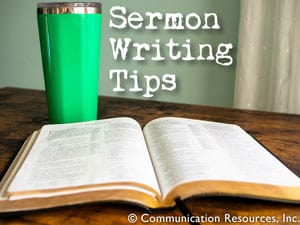 “SlamBall Jesus” seemed like such an awesome sermon. A new extreme sport had been introduced in the U.S., one in which basketball was played with trampolines on the court and wild leaping, hitting and slam-dunking. I connected the SlamBall game to Jesus clearing the moneychangers out of the temple and said that he was angry, fired up and introducing a form of Extreme Christianity, what I called “Xtreme X-ianity.”

Well, guess what? I preached it just as the U.S. was invading Iraq in March of 2003 and the sermon was a dud. Completely tone-deaf to the anguish that people were feeling at the beginning of a major international conflict. I should have slammed “SlamBall Jesus” into the trash can.

We’ve all missed the mark with Sunday sermons, and I know that the longer I preach the more I’ll put the arrow in my foot instead of in the bullseye. But here are some tips I’ve picked up over 30-plus years of preaching that should improve anyone’s aim:

If the congregation is enduring a pandemic, talk about the challenges of wearing masks. If the streets are full of protesters calling for racial justice, talk about the biblical imperative to “do justice.” Don’t be like the pastor who infuriated a military friend of mine by preaching a sermon on the Sunday after 9-11 without ever once mentioning the terrorist attacks.

The Word of God is powerful, able to bring order out of chaos and to create something out of nothing, as the creation story in Genesis makes abundantly clear. Any sermon worth hearing is going to bring God’s Word to life, and the commentaries in Homiletics offer new insights into what the Scriptures are saying to us today. Read the text, study it, let it speak to you, and then share that message with your people.

Everyone loves a compelling story, a fresh insight, a new idea, or a cool gadget. Start your sermon with an illustration that will hook them and draw them deeper into the truth of the Bible. Jesus was a master of this, saying, “The kingdom of God is like …” and then talking about sowers or servants or prodigal sons. Yes, it’s true, not every idea works – see “SlamBall Jesus.” But a good hook engages people much better than an explanation of the genealogies of First Chronicles. Homiletics is full of fresh material that can capture the interest and attention of your people.

A sermon is not a TED Talk, nor is it a therapy session in which the preacher unloads inner turmoil. But it has to reveal the passion and convictions of the person who is speaking, or it will come across as a lifeless lecture. So, tell some personal stories, preferably vignettes that make you look clueless. Talk about what matters to you, whether it be the plight of your homeless neighbors or the struggles of being a parent. You’ll be surprised at how often the personal becomes the universal.

Communication involves both speaking and hearing, and the reality is that not every church member hears a message in the same way. Some will be engaged by a human–interest story, some by a historical tidbit, some by a technological insight, and some by a thought from a leading theologian. The animating illustrations in Homiletics give a range of options for engaging your hearers in a variety of ways.

Notice that I didn’t say to keep it short. Some churches expect ten-minute homilies and others demand forty-minute sermons. Regardless of the length of the message, no one wants to hear a preacher ramble and waste valuable time in search of a point. Know what you are trying to say and say it. Your hearers will thank you and return to hear more.

I’ve often found that the toughest part of the sermon is the “fatal final third,” when I try to apply the hook and the Scripture message to the real lives of my church members. Since there is great diversity in every congregation, coming up with applications that will speak to teenagers and retirees can be challenging. But everyone wants a message they can take home and make real in their daily lives. So, listen to your people, look hard at your community, and come up with applications that they can put into action.

I often remind my church staff that we are in the inspiration business, which means that people should feel better at the end of a worship service than at the beginning. People want to hear the Word of God, gain a new insight, receive some assurance, and be given a take-home challenge.

Although I don’t expect every one of my sermons to be a slam-dunk, I’m trying to avoid as many “SlamBalls” as possible. And I’ve found that Homiletics can help to keep me in the game.