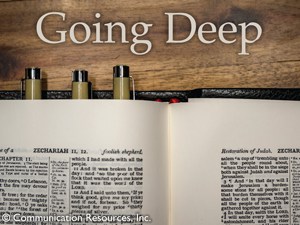 One of the ironies of being the Senior Writer for Homiletics is that I’m a “series” preacher writing for a lectionary-based magazine. While I’ve used the lectionary at times over the years and certainly value the cycle of texts and seasons, I tend to gravitate toward sermon series and, in particular, sermon series that do a deep dive into a particular biblical book. Granted, you can do essentially the same thing with the lectionary, but I like the freedom of crafting my own outline and study, tailoring which book and message my congregation may need to hear at a particular time.

Last Christmas, for example, I began a deep dive with my congregation into the gospel of John. On Christmas Eve, we began with the powerful theological and Christological statements of the prologue about the Word becoming flesh and then continued through the gospel each week, through and even a little beyond Easter. All of our Sunday school classes and small groups did a concurrent study of John during the entire series, and we began providing a notes page and daily devotional guide in the weekly bulletin that encouraged people to read more of the text for themselves, answer some probing questions, and even order some of their daily prayers around issues that the gospel raises. The goal was to get people into the Scriptures for themselves and to reinforce and apply their learning and what the Holy Spirit was saying to them as they moved through the rest of the week.

Biblical literacy is a problem in many of our churches, and getting people to actually open their Bibles and read them, let alone understand them, is a challenge. Encouraging an entire congregation to focus together on a particular text, its meaning and its application is one way to bridge the gap and create a congregational culture in which there’s a hunger to learn and grow more.

One of the advantages of the lectionary is that it often forces a preacher to move away from his or her favorite or preferred texts and preach from more difficult passages. The downside, however, is that we often only dip our toes into those biblical books and miss the larger context and richness they can provide. Take the Minor Prophets, for example. We all know some of the great snippets and quotes from those short and obscure writings, but have you ever preached through them in their entirety? I did a summer series where I focused on one Minor Prophet each week, exploring the key themes in each book, and then encouraged people to read the rest. The prophets address people who are living in exile and their messages are especially relevant to 21st century Christians who often feel like cultural exiles in an increasingly secular world. A deep dive into those books was a treasure trove of learning for me and for my congregation.

As the leaves turn and autumn sets in, many of you are already beginning to plan your preaching for 2020. If you’ve been on the lectionary cycle for many years, I encourage you to consider taking a break and trying a deep dive with your congregation into a particular biblical book. If you’re a topical series preacher, I encourage you to do the same. Make a particular biblical text the focus of your entire congregation for a season and see what kinds of results it might yield. My guess is that you’ll discover a new excitement in your own study as well as a hunger in your congregation to want to engage the Scriptures in a deeper way.

Of course, Homiletics is a helpful companion no matter what method of preaching you use. The site is searchable by biblical book and text, and you’ll discover a ton of resources, commentaries and sermon starters that our writers have compiled over the years. I’m always amazed at the way a particular text can be mined for gold over and over again with the Spirit’s help.