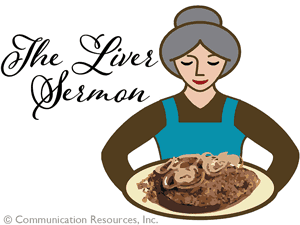 My grandparents on my mother’s side were German immigrants. When they hit America just before the war, they had no money, no kids and no English.

But Grossmama and Grosspapa had plenty of food, especially spuds, which they heaped high on the kitchen table of their southern Idaho farmhouse.

We kids liked to visit our grandparents, but we didn’t like it when Grandmother served up liver. The pungent, off-putting smell of liver caused our nostrils to quiver in dread and our noses to scrunch and wrinkle in rebellion. Chewing on a slice of liver — she called it de-boned steak — was like chewing shoe leather, except shoe leather tasted better — or so we thought.

Grandmother and Tante Louise did their level best to make it palatable, of course. The liver was fried in a pan full of onions, and eggplant was thrown in, too (that was no favorite, either, by any means), and assorted spices were sprinkled atop the mixture.

But liver is liver.

And Grandmother had not yet received the memo that you shouldn’t force kids to eat what they don’t like. She might’ve suggested that a “thank you bite” would suffice. She might’ve offered us a choice: “Would you like liver tonight, or mac and cheese?” No. Didn’t happen. If it was on your plate, you ate it. “Zere are millions of sdarffing Kinder around zee vorld vo vould loffe to haffe zome food in zeir tummies tonight.” This was my life: Food landed on my plate that I didn’t put there. Someone else put liver on my plate, not me. And I ate it.

My own mother was in cahoots. She tried to explain that “liver is good for you.” This, I learned, was the primary reason we had to have liver once a week: It was oozing iron, and iron was good for you.

Back then, eating liver was a thing. Today, not so much.

I opened a sermon not too long ago with this story. Then I explained that the sermon on this particular day was a liver sermon. It’s not going to taste good. In fact, we might hate it. I explained that I’d try to make it go down as best possible, but it is what it is. Liver. I acknowledged that some of them might think this was the “wurst” (pause) sermon ever, a sermon I didn’t particularly want to serve, but it was time. It was on their plate; they had to eat it. Mac and cheese next week.

Honestly, looking back, I can’t remember what the subject was. I think it was about baptism back in January when all the baptism texts come up every year.

There’s nothing unpalatable about baptism, really. I can think of other topics that might make the congregation feel like I was meddlin’ in matters that, in their view, are none of my business. Things like sin, judgment, accountability, discipline, sexual promiscuity, divorce, self-righteousness, pride, money — things like that.

A sermon about baptism — well, it doesn’t really gets your juices going. Or is that just me? For one thing, I struggle with the takeaway. I’m looking at a congregation of single moms, working people, professionals and senior citizens, and they all have their own set of issues. They’re worried about the kids, their aging parents, financial pressure or health issues.

Now the preacher’s talking about baptism. The nostrils flare and the nose crinkles a bit. They close their eyes so that they don’t have to see what’s on the plate, and maybe it will taste better when it’s going down. But soon, they’re sound asleep right on their padded chair.

What’s the takeaway? What morsel is there for them that’s going to better equip them for the coming week to be a strong, confident child of God? “Baptism is an outward sign of an inward grace …”

Nah. That’s not really too great.

But when eating liver, you have to realize that sometimes you ingest nutrients without understanding how they’re going to be useful. They just are. And when you need those nutrients they will be there. Why?

Because you ate your liver. Our task as preachers is to deliver the whole counsel of God.

To be clear: A liver sermon isn’t a sermon about the hard texts of the Bible about which we rarely preach. I’m thinking about Psalm 137:9, “Happy shall they be who take your little ones and dash them against the rock!” You preach on that text and everyone is going to be listening. No one will object if you serve up some of that.

The same is true of a sermon about why Lot would offer his two daughters to a small mob of hopped up guys who he knew would gang rape them. Also true of a sermon about why Jesus didn’t know when he would return. He said, “But of that day or that hour no one knows, not even the angels in heaven, nor the Son, but only the Father” (Mark 13:32). Although fully human, wasn’t Jesus fully divine? And if fully divine, he would have to know all things, wouldn’t he?

Or this: A sermon about how Elisha, after being taunted about his bald head by mischievous children, cursed them, and called forth a bear from the woods to run down those children (42 kids) and maul them and eat them. A sermon about this would be delicious in a perverse sort of way. (See 2 Kings 2:23-24.)

These are not liver sermons. Liver sermons by definition are sermons that are hard to preach, hard to swallow and hard to listen to. But they’re also good for us.

Liver sermons might vary according to the preacher and the congregation. What sermons do you hate to preach? Why is this? This is your liver sermon.

Feel free to add a heap of onions — some good illustrations, maybe. Might help the sermon go down better.

If you have ideas about liver sermons, let me know. I’m interested.