Have Yourself a Medieval Advent! 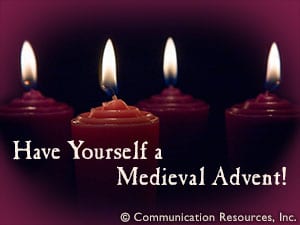 Planning for Advent is one of the most difficult tasks for the preacher, particularly for those of us who have preached a lot of Advents over the years. It’s that time of year when your local big box store has been stocking Christmas items since late September, when Christmas carols play 24-7 on certain radio stations, and when shopping ramps up to a frenetic pace. People in church clamor for Christmas carols during Advent services. That bouncy song “We Need a Little Christmas Right This Very Minute,” seems less a hope and more of a command during the weeks leading up to the Big Day.

But it wasn’t always this way. In fact, as early as the fourth century, the church engaged in a period of fasting and penitence in December that had no correlation with Christmas. It was only in the seventh century that the connection was made. Like Lent leading up to Easter, Advent was a period of fasting, penitence and preparation, and by the medieval period it was firmly established.

But the medieval clergy understood Advent differently than we do. While we see Advent as preparation for celebrating the first coming of Jesus, the medieval church saw it as preparation for Christ’s second coming — to engage in fasting and penitence in anticipation that the one who came in the manger would be coming again in glory to judge the living and the dead. Advent was an eschatological focus on the “last things” and that played itself out in practice.

Take the Advent candles, for example. They have represented a lot of different things over the centuries. Most years for us and for most Protestants they have represented Hope, Peace, Joy and Love, wonderful themes anticipating Christmas. But in the medieval church, the meanings were quite different: The candles represented death, judgment, heaven and hell. The Scripture readings for Advent were only secondarily oriented toward the birth of Jesus. Instead, the primary emphasis was on the coming “day of the Lord.”

In other words, Advent wasn’t so much about getting quickly to the light of Christmas, but about acknowledging the darkness that appears before the dawn. Advent was a season for realism, not Christmas dreams and shopping. In fact, in the medieval age, the Christmas season began with Christmas Day and extended 12 days (the 12 days of Christmas). That’s when you went shopping for pipers piping, maids a-milking and a partridge in a pear tree!

Advent, in other words, was a season acknowledging that we live between two ages — the present age and the age to come. It is the midnight of the Christian year; a time to be thinking about last things.

No one can help us understand this better than John the Baptist. Throughout church history, he has been the central figure of Advent. He is the herald of the age to come; not just the coming of Jesus in his immediate present but also the arrival of the kingdom of God in its fullness in the last days. He is the herald whom the prophet Malachi anticipated, “the prophet Elijah” whom God would send before “the great and dreadful day of the Lord comes” (Malachi 4:5). It’s interesting that in the original order of the Hebrew Bible, Malachi does not appear last in the canon, but he does in the Christian canon of the Old Testament. It’s a clear sign pointing to the ministry of John the Baptist, who opens the New Testament narrative.

As a throwback to the Old Testament prophets, John is out of step with our time. He makes us feel uncomfortable in a season when we want to focus on the comfort of family, decorations, traditions and even comfort food. And yet we need him to speak to us before we get to Christmas. It’s no coincidence that every one of the gospel writers begins their narrative with John the Baptist. All of them agree that without him, there is no good news, no gospel of Jesus Christ. Without John, we will become so much like the rest of the world which celebrates Christmas without having any idea what it all actually means. We’ll put up our decorations and pretend for a few weeks that everything is great and that all we need is a little retail therapy to make ourselves feel better.

With John, however, we will deal with reality — that there is darkness in the world and in us, and that the only way out of that darkness is through the light of Christ that is about to dawn. John pokes at us like a good prophet, calling us to repentance, to return to God, to examine our hearts and to prepare for Christ’s coming.

Last Advent I decided to go all medieval and changed our candle liturgy to match those medieval themes of death, judgment, heaven and hell. It was a bit of shock to the system for a lot of my people, but it was a good one. The light of Christmas burns a lot more brightly when we acknowledge the darkness.

This year’s Advent gospel readings from Matthew take us into those themes about the coming day of the Lord and the prophetic ministry of John the Baptist. Don’t skip over them in favor of another bouncy pre-Christmas theme. Give the church a little Advent, right this very minute, and help them prepare for the coming of the Lord!