Gratitude in a Culture of Outrage 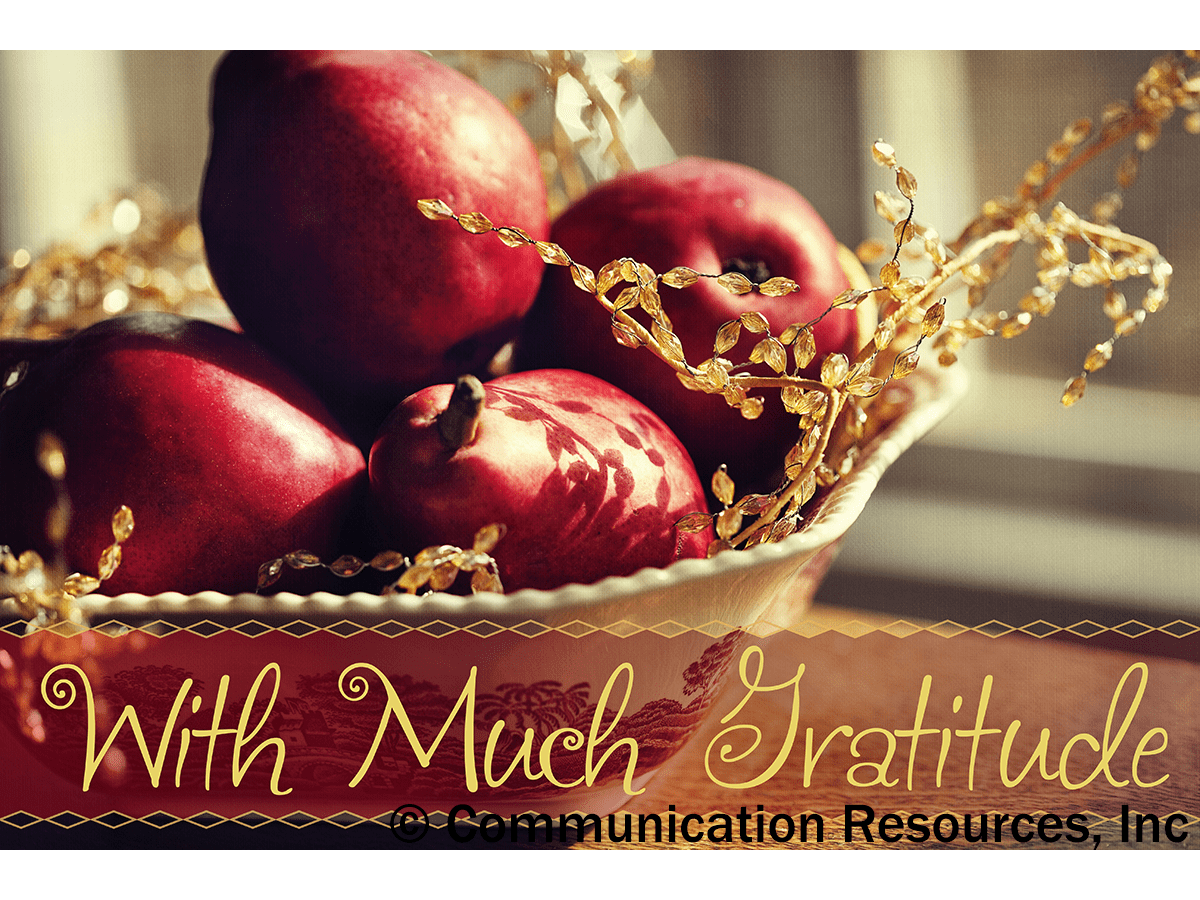 We’re coming up on the two months of the year which unequivocally call for more gratitude, rejoicing and celebration than any other 61-day period on the calendar: November and December.

The clarion call to be grateful is issued on Thanksgiving Day, and thereafter we’re reminded of the arrival of the transcendent, ineffable God in human form — a divine visitation which calls for unrestrained rejoicing.

I’m also writing when everyone and her neighbor is talking about the Fred Rogers documentary released last summer, Won’t You Be My Neighbor? A biopic, You Are My Friend, starring Tom Hanks, is scheduled for release in October 2019.

This Mr. Rogers mania reflects our longing for a simpler and kinder era when people actually had neighbors they knew and with whom they were friends. Such relationships still exist, of course, but they seem the exception rather than the rule, because we generally prefer cocooning and social isolation (not counting digital interactions).

Or, perhaps, I am just describing myself.

This isolation (and anonymity), in turn, has contributed to a culture of outrage and complaining. So many people get “outraged” these days. Life is not fair, blogger Mark Manson argues, but “whether you realize it or not, you get to choose what you freak out about, and people today are choosing way too many things.”

There are signs that people are getting fed up with all the outrage and victimhood. Writing in the Chicago Tribune, Heather Wilhelm says, “For some, being offended is practically a credo and an all-encompassing way of life. I find this all rather perplexing, even baffling. Who wants to live this way?”

I’m not about to be critical of those who are social activists with a prophetic ministry. We can still speak truth to power, we can still be agents of change, we can still advocate for civil rights, we can still criticize the government — and be persons of gratitude and generosity.

Gratitude is not about politics.

When we are grateful, we are expressing appreciation for that which is good in our lives.  We not only feel grateful and blessed, but we express that gratitude in meaningful ways.

Wouldn’t it be weird, yet wonderful, if we lived in a culture of appreciation? I can’t even wrap my head around that — like, what would such a world look like?

So, why are some people grateful and others seem to be habitual complainers — victims in a pot of simmering outrage? Can we link gratitude to certain attitudes and behaviors? Here are a few ideas:

Getting old. Many sociologists have noted how gratitude evolves over the years as we mature. People in the late stages of life discover a new and profound appreciation for the small pleasures of life, and are more gracious and accepting of the shortcomings of others, and more grateful for loved ones. They are less likely to spend so much energy being “outraged” and “furious” at low-level irritations and accidents that happen and are more prone simply to shrug them off.

Generations. Your gratitude might be linked, in part, to the generation to which you belong.

Generational research is about identifying characteristics, attitudes and behaviors of the various demographics being studied. The Builder Generation, which Tom Brokaw famously called the “greatest” generation, is quite a different generation than the boomers who followed.

The Builder Generation grew up at a time when, as one writer puts it, “acts of kindness were rewarded with gratitude and love rather than monetary compensation.  … Our generation survived just fine without the convenience of cell phones, computers, and high-speed internet. We didn’t need video games and 500 channels on cable TV to keep us entertained — we were too busy playing dodgeball in the streets with our neighbors until dusk. Whether our families were rich or poor, we appreciated the food on the table and the clothes on our backs. People were judged on their merits and behavior, not by the designer labels they wore or the size of their bank accounts.”

That assessment is no doubt flawed by nostalgia, but clearly, boomers, their children, and their children’s children lost, and seem to have difficulty in recovering, a sense of gratitude that imbued the Builder generation that survived the Great Depression and World War II.

The children of the Builder Generation, were raised in affluent times and became known as a lazy, weird, selfish and petulant generation that perfected tantrums into an art form.

We’ve been reaping the whirlwind for the past 25 years or more, but, fortunately, boomers are getting old, and perhaps may mellow, as is typical with an aging population. But boomers have always broken norms, and they might be the first generation that goes to the grave griping, complaining and outraged.

A number of years ago, Paul Begala wrote an article for Esquire called “The Worst Generation.” He said, “The Baby Boomers are the most self-centered, self-seeking, self-interested, self-absorbed, self-indulgent, self-aggrandizing generation in American history.” Many critics say that the ills of the new millennial culture can be traced back to the policies and practices of thirtysomething Baby Boomers in government whose brain cells were damaged by drugs, and whose common sense had been hammered into oblivion by years of moonbeam thinking and the view that they lived in a post-Copernican world in which they were the center of the universe. Not called “Baby” Boomers for nothing. Big babies.

Gen Xers, the latch  key generation, often ignored by their boomer parents, raised their Gen Y kids (Millennials) as though their children were the Center of Everything — not a strategy for promoting the spirit of gratitude. This has resulted in what many claim is a demographic with an entitlement complex. Some describe millennials as the Me Generation.

The millennials are also the first generation in a long time to be poorer than the generation preceding it. But, say critics, this is primarily due to laziness and narcissism. One writer’s book is titled: Generation Me: Why Today’s Young Americans Are More Confident, Assertive, Entitled and More Miserable Than Ever Before.

So, unless you are part of the Builder Generation (which makes you really old), or are an aging and repentant boomer, you might have a problem with gratitude.  “Grateful” is not how others would describe you.

Psychology. It’s possible, however, that some people are more grateful, more gentle and kinder than others by nature. Gratitude is in their genes, specifically, gene CD38.

According to the research of Sarah B. Algoe and Baldwin M. Way of Ohio State University,  CD38 is a gene that affects oxytocin excretion and oxytocin is known to play a role in promoting social bonding, especially in romantic relationships.

Don’t ask me how Algoe and Way discovered this, but you can read it for yourself in their paper, “Evidence for a role of the oxytocin system, indexed by genetic variation in CD38, in the social bonding effects of expressed gratitude” (see Sources below).

What I found interesting about this study is not only that gratitude might be hardwired in some people more than others, but that in Algoe and Way’s hypothesis “gratitude and its expression provides the behavioral and psychological ‘glue’ to bind individuals together.”

In other words, gratitude has a bonding effect. The apostle Paul speaks of our hearts being “knit together in love.” The New Testament letters continually emphasize the importance of thanksgiving, and that a strong, healthy church and strong, healthy relationships are not possible without a pervasive sense of gratitude.

Bonding is just part of it. As we age, apparently the area of our brains involved with emotions becomes “less responsive to negative information. In turn, reactions to positive information are more prevalent.”

Less responsive to negative information! In other words, the buttons we used to have that people could push? Well, they’re just not working so well when we get old. Can’t push an old person’s buttons anymore.

So, why don’t we switch those buttons off at an earlier age?

The physiological component to gratitude works in the reverse as well. Perhaps a turned-on gene CD38 makes some people innately more grateful than others, but research has also shown that those who are grateful reap a number of health benefits as well.

Dr. Robert A. Emmons, a professor of psychology at the University of California Davis says that gratitude can “lower blood pressure, improve sleep, and lead to eating less dietary fat. Gratitude allows a release of endorphins that can improve our moods, making us happier and healthier people.”

I can’t speak for you, but as for me, I want to be a grateful person. I want to be thankful for the good in my life. I want to express my sense of gratitude to those who have inspired it.

Yes, I can continue to push, resist and struggle against “the wheel of injustice” (as Bonhoeffer described it) that grinds and oppresses the downtrodden.

But I want to be the happiest and most grateful activist ever.

Algoe, Sara B. and Baldwin M. Way. “Evidence for a role of the oxytocin system, indexed by genetic variation in CD38, in the social bonding effects of expressed gratitude.” Social Cognitive and Affective Neuroscience, January 2014. Researchgate.net. Retrieved July 12, 2018.