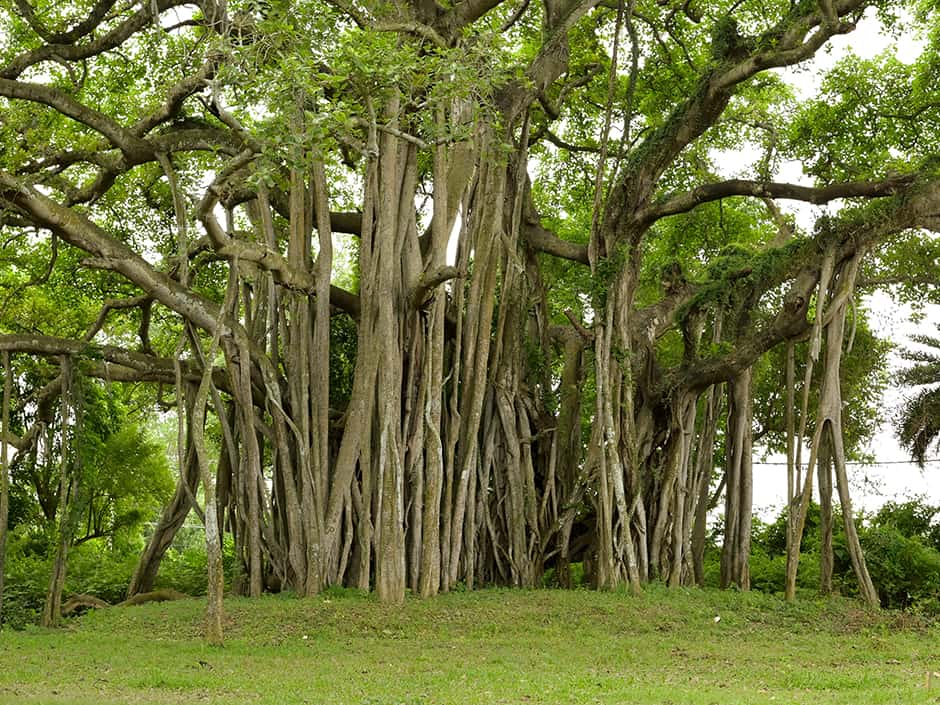 Faithful readers of Homiletics will recall that I’ve waxed modestly about trees on several occasions. The archetype of the tree is an important device in both Scripture and literature. Indeed, the Bible begins with “the tree of life” (Genesis 2:9) and ends with the “tree of life” (Revelation 22:19). Adam and Eve were not to eat of the Tree of the Knowledge of Good and Evil, but the Tree of Life wasn’t off-limits. The psalmist wrote of the righteous as a “tree planted by streams of water, which yields its fruit in season and whose leaf does not whither” (Psalm 1:3 NIV). John the Baptist’s hellfire and brimstone sermons invoked the image of an unfruitful tree that’s “cut down and thrown into the fire” (Matthew 3:10 NIV). Jesus said that a “tree” is “recognized by its fruit” (Matthew 12:33 NIV). And Jesus died on a cross, which is sometimes expressed as “hanging on a tree” (cf. Galatians 3:13). John Newton’s hymn “I Saw One Hanging on a Tree,” is a classic example in hymnody.

Here are some remarkable trees I have seen and the sermons they could inspire:

The General Sherman Sequoia. Located in the “Giant Forest” of Sequoia National Park, the General Sherman is a giant sequoia tree. It is neither the tallest, widest, nor oldest known living tree on Earth. But it’s height of 275 feet, diameter of 25 feet, and estimated age of 2,300-2,700 years does place it among the tallest, widest and longest-lived of all trees on the planet (Wikipedia). Yet, by one measure — an estimated total volume of 52,513 cubic feet — it is the largest known living single-stem tree. This sermon, then, is about the qualities that make for strong character.

The Heritage Tree. This giant spruce, located on Cape Perpetua on the Oregon coast, is called “The Heritage Tree” because it stands almost 200 feet tall, and it started to grow as a seedling about the same time Martin Luther was pounding his theses on the church door at Wittenberg. What’s really fascinating about this tree, however, is that there’s a tunnel about 3 feet in diameter that runs through its base, making it appear that the tree is standing on a tripod. This tunnel, this empty space running through the root “fingers” or buttresses is the space where a nurse log once was located. This giant Sitka spruce began its life as a seedling on a nurse log. Nurse logs were once great, giant trees themselves. Then they died, fell to the earth, and became nurseries for entirely new ecosystems of life. With a nurse log down on the forest floor, light, as well as rain, streams through the canopy. In such a high-moisture environment, the nurse log decays rapidly, and soon the seeds of mighty trees, caught in the mossy layer that now grows on its surface, sprout and take root. As the sprouts grow larger, their roots will surround the girth of the nurse log, becoming a new tree that will shoot up to take its place in the forest. Soon, strong and viable on their own, the new trees stand tall, and the nurse log, utterly decomposed, has disappeared. Such has been the case with the 500-year-old Heritage Tree. This sermon, then, is about being a person, or a church, that nurtures and trains others who will follow, passing on our teachings and traditions, stepping aside so that others may grow in our place, making use of what we have learned.

The Banyan Tree. The banyan is native to India, but they can be found in the United States and other parts of the world, especially Asia. As it grows, the heavy limbs put forth roots that drop to the ground to form secondary trunks that support the large limbs. Step under an old banyan tree, and you are stepping into what looks like a miniature forest. They can grow to an enormous size and have a long life span. A banyan tree I sat under in China was about 1,500 years old. I saw all of the secondary trunks supporting the older, heavy limbs. I saw a large area under which people could gather, as indeed they do in many Asian communities, to discuss issues and concerns of a village. And I saw a metaphor for the church. This sermon, then, is a sermon about the nature of the church. A large host trunk, many long, large and heavy limbs extending in all directions, supporting trunks and root systems, a large, shaded area where people could gather in community, find shelter from a storm, or rest from their labors.

Silk-Cotton Trees. Ta Prohm is the modern name of a temple at Angkor, Siem Reap Province, Cambodia, built in the late 12th and early 13th centuries. Unlike most Angkorian temples, Ta Prohm has been left in much the same condition in which it was found: the photogenic combination of jungle surroundings and trees growing out of the ruins have made it one of Angkor’s most popular temples with visitors. The trees are perhaps the most distinctive feature of Ta Prohm (Wikipedia). This temple was used as a location in the film, Lara Croft: Tomb Raider. The silk-cotton trees grow tall above the ruins. The bases of their trunks look as though they were once in liquid form and poured over the walls, flowing to form molten “hands” with woody fingers poking and stretching around the rocks and foundations. It’s truly a sight to see. This sermon, then, is about taking care of business — before it’s too late to take care of business. These trees were allowed to grow and overrun something that was beautiful. Now they’re in control and they loosen walls and foundations, just as bad habits, bad practices and bad choices can do to our own lives.